Joe Hickman, the Chief Engineer for 801 Towers in Los Angeles, has operated numerous buildings in downtown LA over the years. According to historical energy data, his current building at 801 Figueroa is using less than 50% of the energy required per square foot as compared to similar buildings in the area. In fact, his building just received an Energy Efficiency Award for 2008 from the Los Angeles Department of Water and Power (LADWP).Contributing to the efficiency of this 24 story, 430,000 square foot office building is a thermal energy storage system installed in 1992. Joe reports that, “the two 800 ton chillers simply never come on during the 10 hour daily air conditioning cycle when the building is being cooled by the TES system. Only one of the chillers is used at night to charge the Ice thermal storage system except on the hottest days in the summer when the second chiller is sometimes called upon to top up the ice system up for the next day”. 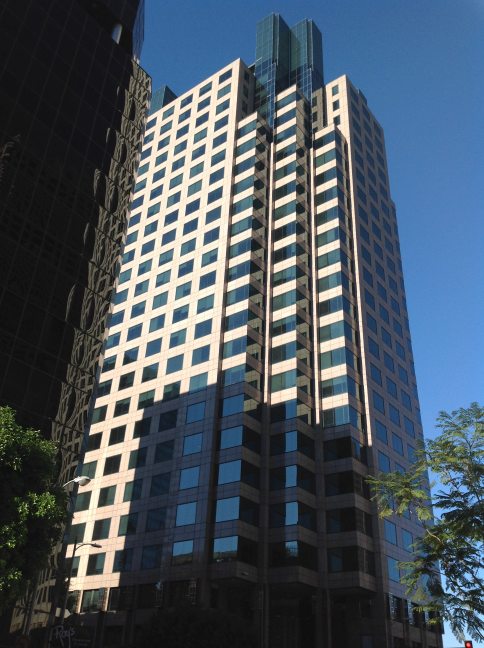 To qualify for peak load shifting incentives and off-peak rates offered by LADWP, the building was designed in 1990 to include 8,300 ton hours of thermal energy storage (TES). The system is actually capable of approximately 11,000 ton hours of capacity, which in hindsight, was valuable engineering judgement that has paid off with ever-changing electricity prices and energy markets.
Flack and Kurtz of San Francisco, the principal engineer, and the Los Angeles Department of Water and Power may not have anticipated all the changes in energy markets during the past two decades. Looking back today, however, this system has proven to be a good example of engineering foresight. The engineer, building owner and electric utility recognized the need for flexibility to deal with the uncertainties in electrical supplies and increasing energy costs. Leadership shown by LADWP with incentives and off-peak rates was part of an overall business plan that shielded customers in that service territory from many of the problems faced by ratepayers elsewhere in the state and the rest of the country. Concern about the reliability of energy supplies and the need for design foresight and peak load shifting may finally become the norm in California and the nation as energy and climate concerns become national priorities.
Green Benefits of Off-Peak Energy Storage: In addition to the reduction in energy costs, thermal energy storage (TES) is effective in reducing green house gasses and the carbon foot-print of electric generation facilities. This benefit may not have been anticipated by the building designers in 1990 but the positive effects of TES on emissions from power plants has been well documented over the years as concerns about climate change have gained attention. Both of the largest California utilities recently reported heat rates, the number of btu’s of energy to generate each kilowatt hour, were significantly lower during the night off-peak periods than during the day. For example, the largest electric utility in Southern California reported that only 7,263 btus are required to produce one kWh during off-peak night hours as compared to 13,258 btu’s during the peak daytime period. While many factors effect heat rates, this 45% decrease during the off peak period indicates that less fossil fuel is required and, therefore, lower emissions result when electricity is generated at night and stored in the form of ice in a thermal storage tank. This same conclusion was reported by the California Energy Commission (CEC) in its 1995 report on the benefits of thermal storage. The CEC Report showed a similar 45% improvement in off-peak heat rates statewide and estimated that TES could help reduce carbon dioxide emissions in California by 260,000 tons annually within 10 years. With increasing emphasis on reducing fossil fuel consumption and mitigating air pollution and climate change, the green benefits of thermal storage are more relevant today than ever.
After incentive payments from LADWP, the TES system at 801 Towers cost approximately $640,000 more than a non-storage air conditioning system. With the reported capability to shift approximately 2,000 kW of electrical demand to off-peak periods, the additional costs can be translated to approximately $320 per kW of peak electrical demand reduction. The net installed cost was approximately $58 per ton hour of actual thermal storage capacity. The cost per shifted kW was a bargain compared to the cost of new generation capacity. Although prices for electricity and equipment have changed over many years, that bargain is even more compelling as costs and environmental impacts associated with new power plants have become more painful and politicized.
The 801 Towers system includes a 180,000 gallon concrete tank with a polyethylene liner and approximately 750,000 spherical ice containers (* Cryogel Ice BallsTM) as well as two 800 ton, Trane three-stage centrifugal chillers. The tank is located three levels below the street and adjacent to the underground parking garage. The roof of the concrete tank is formed by a ramp that connects two garage levels. As in most civic centers, parking is a premium in downtown L.A. This tank configuration and ice storage technology was chosen because the tank could be installed in a manner that would not displace parking spaces in the garage. Flexibility of the system allows for compliance with changes in utility rate structures. This is apparent when looking back at the original specifications as compared to operational demands now being placed on the system which exceed design intent. 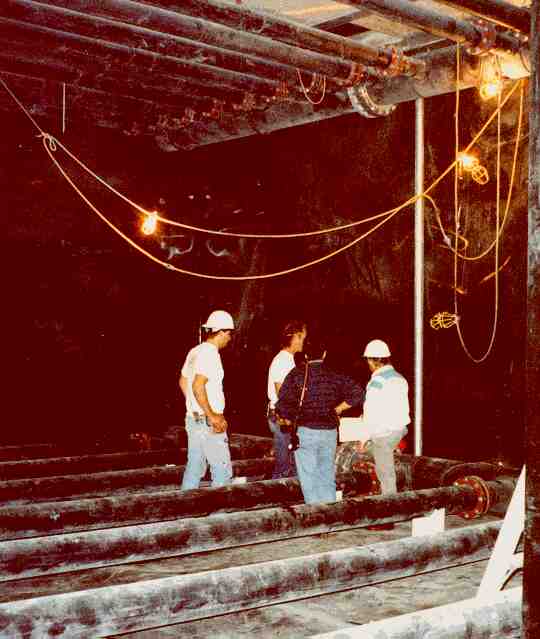 The original design intent was to shift the cooling load for a period of 8 hours. However, today the system is actually shifting load for 10 hours per day. According to Joe Hickman, “the current agreement with LADWP requires us to keep the chillers shut off completely from 10 am to 8 pm. The system has enough capacity to carry the extended hours of operation, even without charging fully every night.”  The concrete tank was fitted with a one-eighth inch thick polyethylene liner to prevent leaks due to normal thermal expansion and contraction. The liner allows for 1.5 inches of rigid insulation between the liner and the tank wall. This unique solution to insulating an underground tank offers double-wall leak security as well as a vapor barrier. 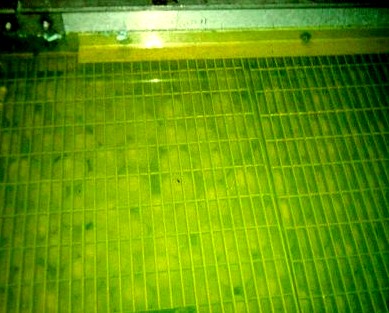 Ice Balls in storage tank below upper tank grating. The clarity of the heat transfer fluid and lack of corrosion after years of operation are important indicators of long term viability of TES applications.
Thermal storage is not new technology although proven environmental benefits and energy cost savings are only now gaining the wider attention of design engineers and electric utilities across the nation. TES is increasingly recognized as an environmentally friendly and economically attractive alternative to new generation capacity. Today’s designers and regulators have the benefit of years of proven success with TES systems and equipment. Improved efficiency of existing power generation equipment, and means to avoid building new expensive power plants, are major benefits to electric utilities. Lower energy costs and improved reliability stand as major benefits to consumers. Reductions in the use of fossil fuel and the decrease in greenhouse gas emissions are benefits to society that should inspire incentives for thermal storage as part of state and national energy policy.
Inside the storage tank before filling with Ice Balls
by:  Victor J. Ott, P.E. President of Cryogel, San Diego, CA More than 20 Million Ice Balls to domestic and international projects over the past 25 years. * Ice Ball is a trademark of Cryogel.